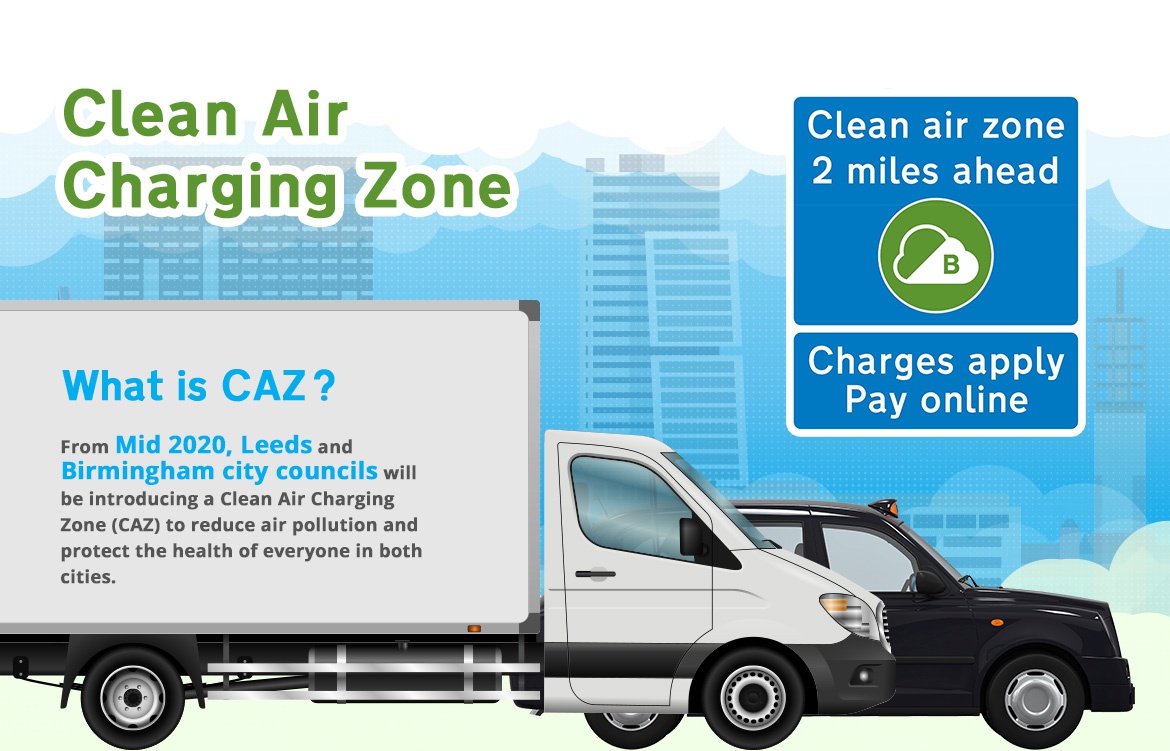 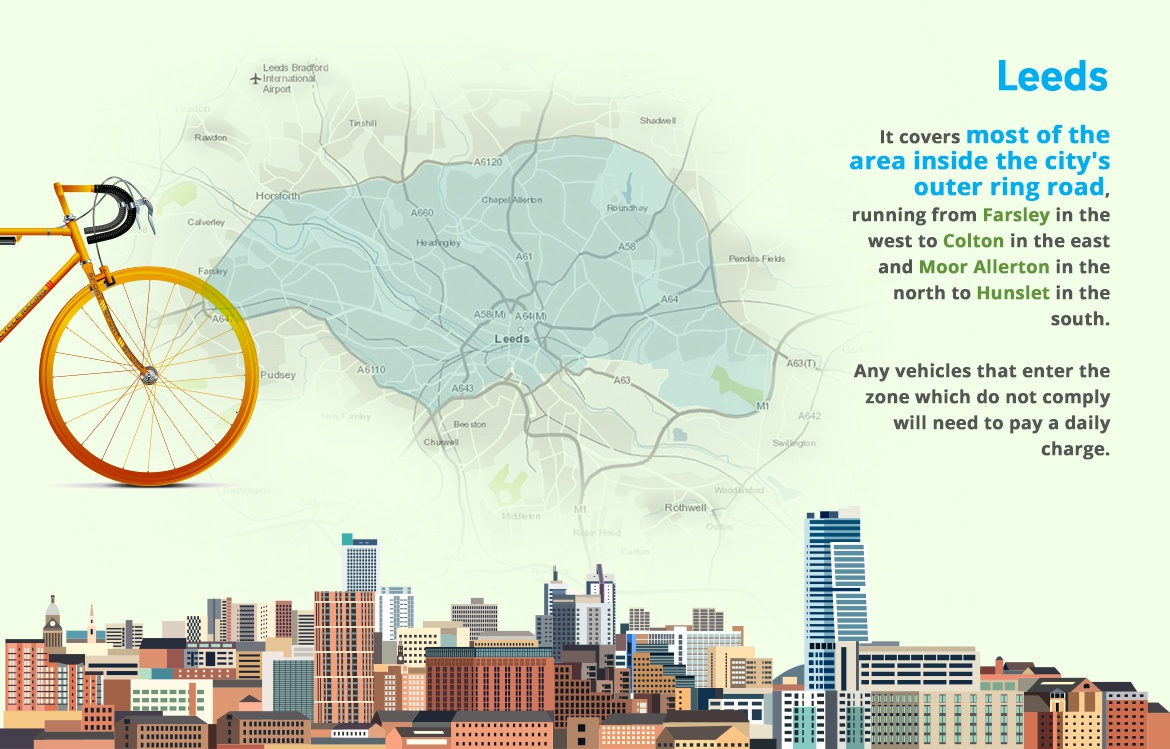 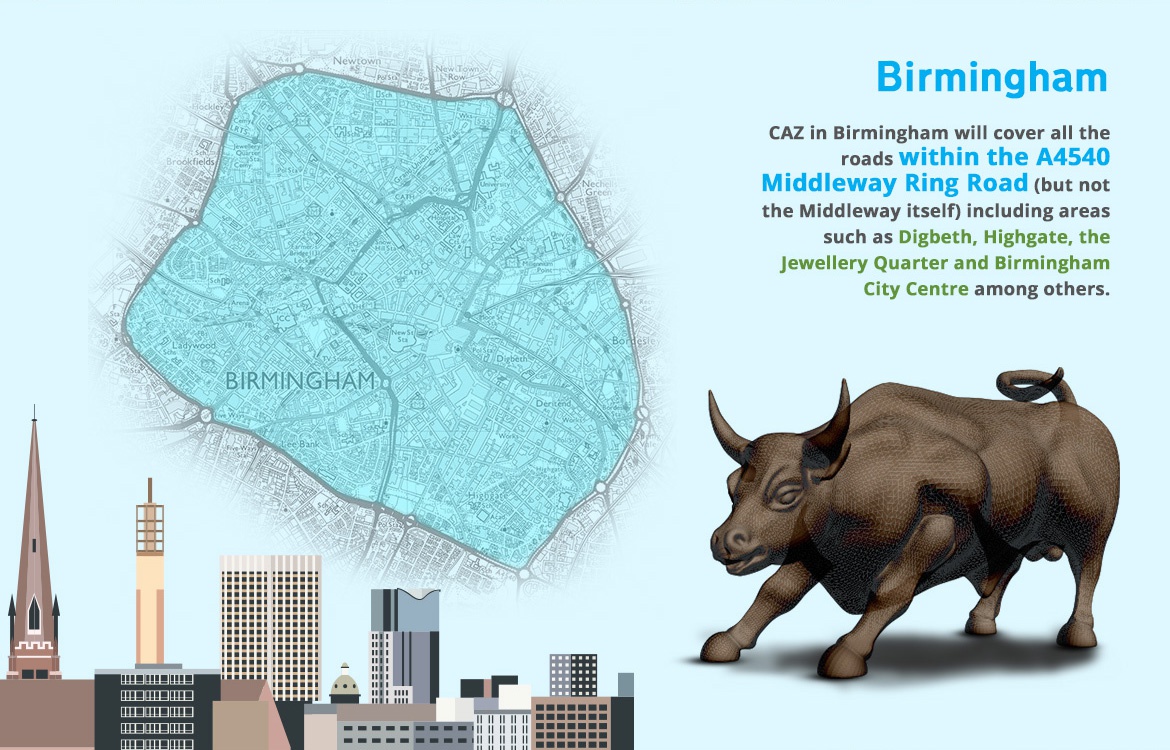 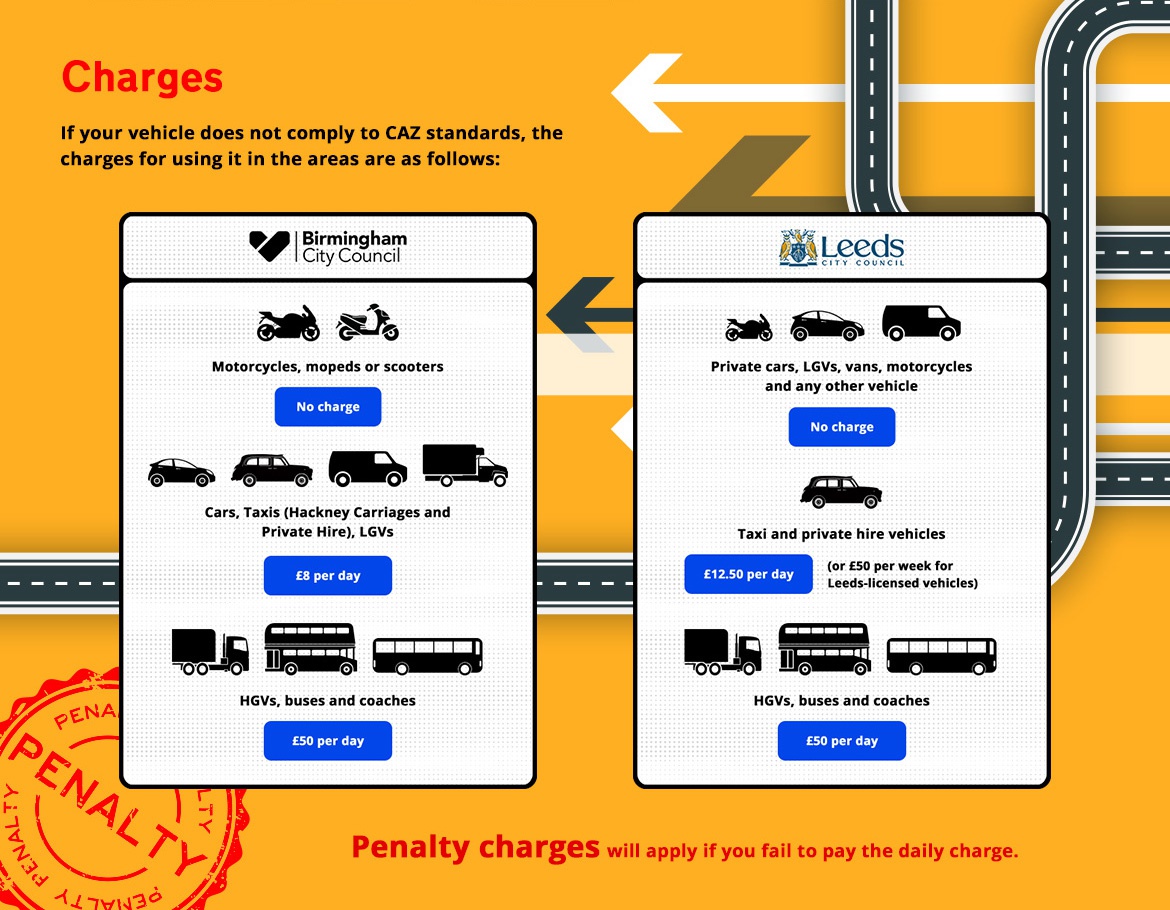 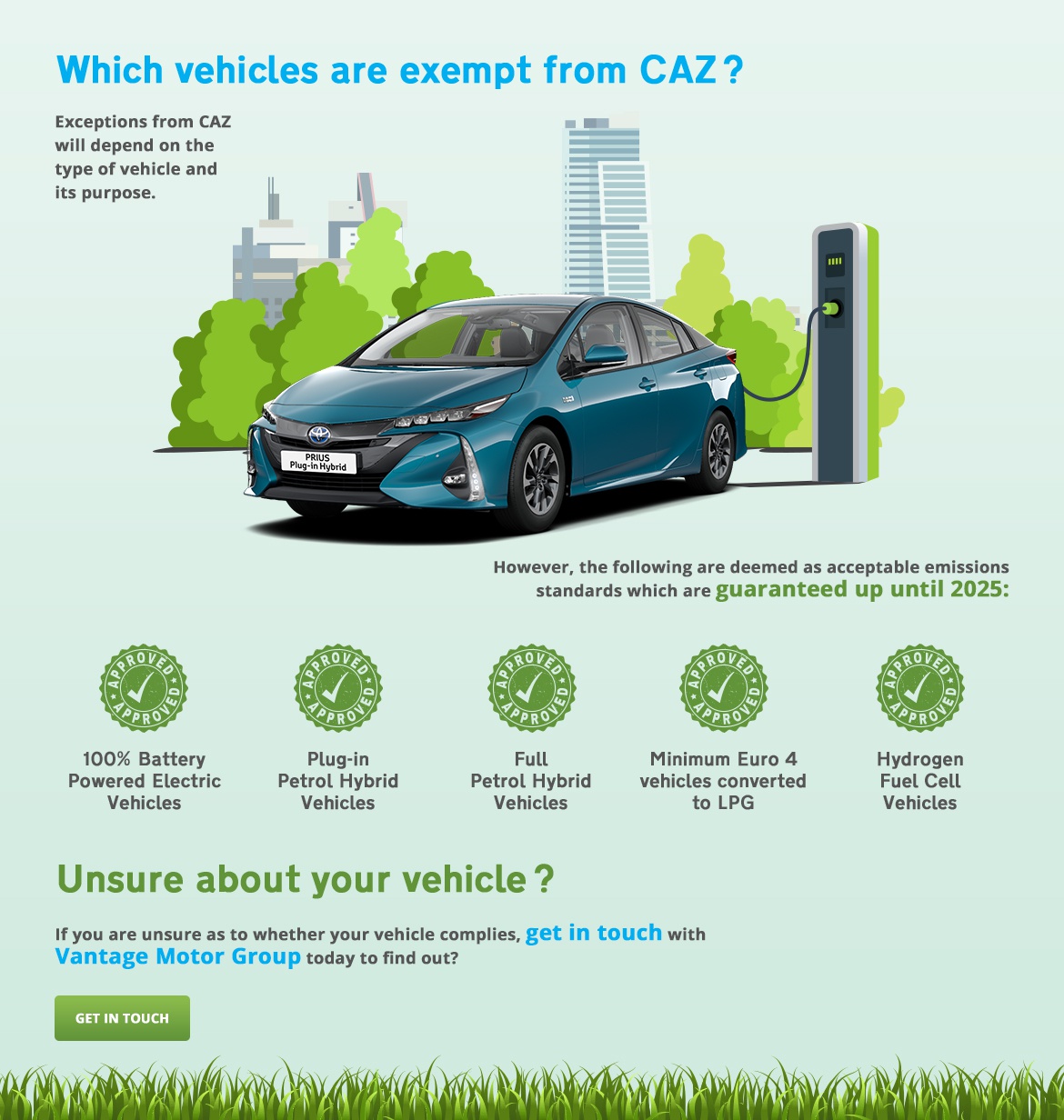 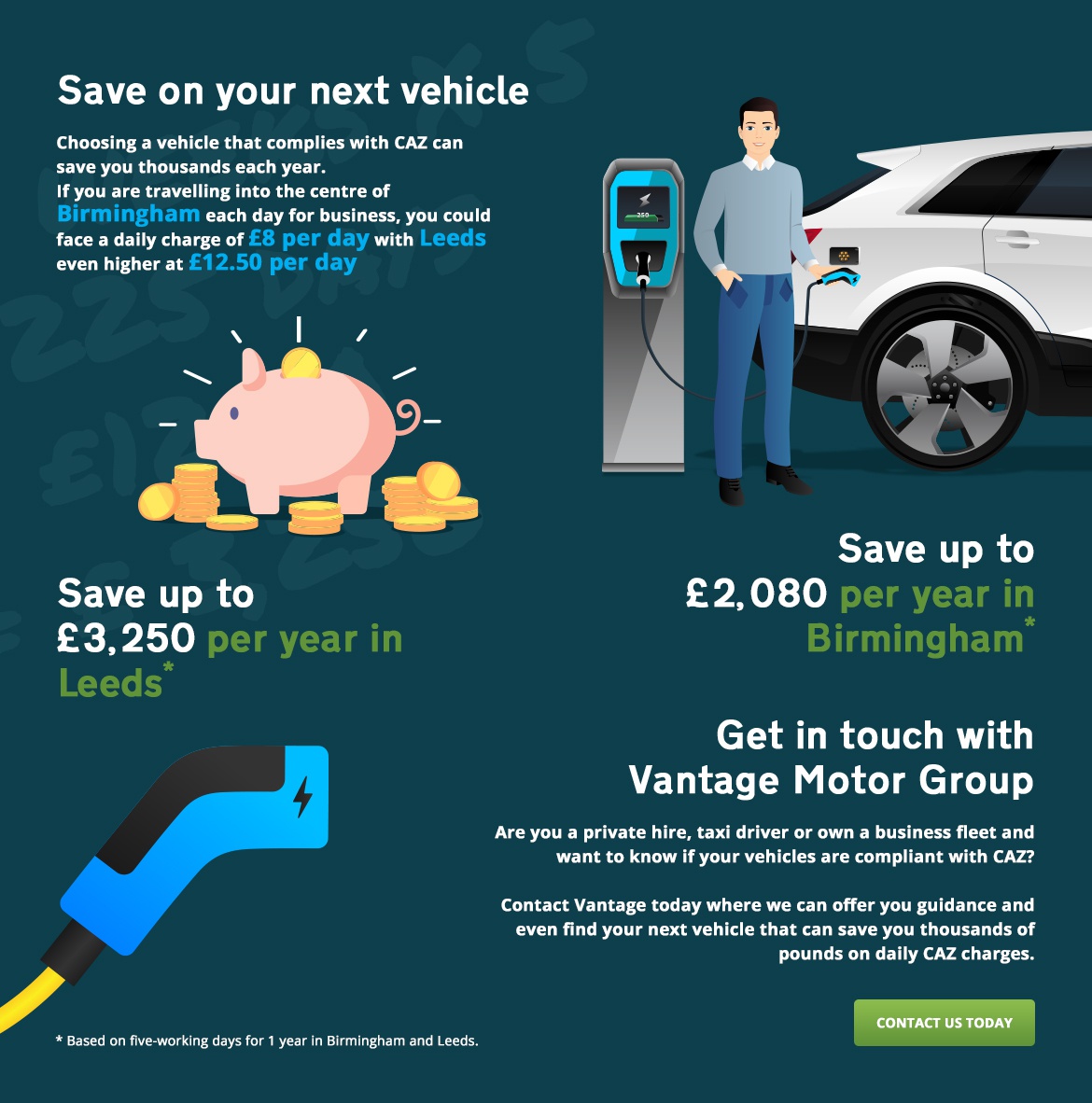 The Clean Air Charging Zone is coming to Birmingham and Leeds from 2020. In anticipation for this, Vantage Motor Group want to make sure you are prepared for the changes ahead with a vehicle that complies with the CAZ standards.

Why not contact one of our four dealerships in Birmingham and Leeds where our dedicated team are on hand to advise on your next move regarding CAZ? We have fantastic offers on battery powered, plug-in petrol and full petrol Hybrid vehicles.

From mid-2020, Leeds and Birmingham city councils will be introducing a Clean Air Charging Zone (CAZ) to reduce air pollution and protect the health of everyone in both cities. The initiative is designed to help businesses transition to cleaner, less polluting vehicles which will benefit the people of Yorkshire and the West Midlands.

What are the daily CAZ Charges for Birmingham and Leeds?

If your vehicle does not comply to CAZ standards, the charges for using it in the areas are as follows:

Penalty charges will apply if you fail to pay the daily charge.

What areas are affected by CAZ in Birmingham and Leeds?

CAZ will be the largest zone of its kind in the country for Leeds. It covers most of the area inside the city's outer ring road, running from Farsley in the west to Colton in the east and Moor Allerton in the north to Hunslet in the south. Any vehicles that enter the zone which do not comply will need to pay a daily charge.

CAZ in Birmingham will cover all the roads within the A4540 Middleway Ring Road (but not the Middleway itself) including areas such as Digbeth, Highgate, the Jewellery Quarter and Birmingham City Centre among others.

Back
Vehicle Valuation
Compare Saved Vehicles
Top
Close
Your Cookie Settings
Select your cookie settings
Strictly Necessary Strictly Necessary cookies are essential to let you move around the website and use its features, such as accessing secure areas, shopping baskets and online billing. These cookies allow our website to provide services at your request.
Performance Performance cookies collect information about how you use our website e.g. which pages you visit most often, and if you experience any error messages. They also allow us to update our website to improve performance and tailor it to your preferences. These cookies do not collect any information that could identify you - all the information collected is anonymous. They will not be used to target adverts to you on other websites.
Functional Functionality cookies are used to remember the choices you make, e.g. your user name, log in details and language preferences. They also remember any customisations you make to the website to give you enhanced, more personal features.
Targeting Targeting cookies collect information about your browsing habits to deliver adverts which are more relevant to you and your interests. They also measure the effectiveness of advertising campaigns.
Save Settings
Cancel Changes

Your settings will take affect when you refresh the page or move to a new page. Find out more about cookies