Required cookies are essential to let you move around the website and use its features, such as accessing secure areas, shopping baskets and online billing. These cookies allow our website to provide services at your request.

Functionality cookies are used to remember the choices you make, e.g. your user name, log in details and language preferences. They also remember any customisations you make to the website to give you enhanced, more personal features.

Targeting cookies collect information about your browsing habits to deliver adverts which are more relevant to you and your interests. They also measure the effectiveness of advertising campaigns.

This site uses cookies and related technologies for site operation, analytics and third party advertising purposes as described in our Privacy and Data Processing Policy. You may choose to consent to our use of these technologies, or further manage your preferences. To opt-out of sharing with third parties information related to these technologies, select "Manage Settings" or submit a Do Not Sell My Personal Information request.

Last weekend marked the 86th Le Mans 24 Hours which is held annually near the town of Le Mans in France. One of the most prestigious races in the racing calendar, this year was Toyota's 20th entry into the race.

Le Man's was created to test not only a manufacturers ability to create fast cars but also reliable cars which in turn led to innovation in fuel-efficient vehicles. As Toyota pride themselves as market leaders in Hybrid technologies this is an ideal test for their vehicles.

Sébastien Buemi, Kazuki Nakajima and Fernando Alonso started from pole position in the No8 Toyota TS050 Hybrid and claimed their win after 388 laps of the circuit. The result gives their bid for the FIA World Endurance Championship a major boost.

Mike Conway, Kamui Kobayashi and José María López gave Toyota even more to celebrate by securing second place in the race, two laps behind the winners.

​The Toyota Gazoo racing colleagues from Japan and Germany, have been working hard to keep improving their Hybrid performance with this weekend’s cars, the two TS050 Hybrids, using 35 percent less fuel that in 2012.

“Finally, we won 24 Hours of Le Mans this year. I want to enjoy the great feeling today with all fans who have supported us for long time. Of course, this is another step towards the next challenge so I would like to ask your continuous support from now on too. Thank you very much.”

We look forward to seeing the he team returning to action in round three of the FIA World Endurance Championship, at Silverstone in August. 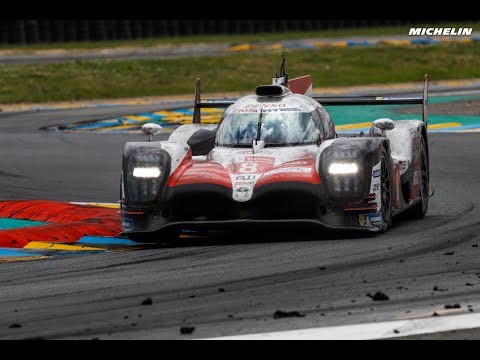